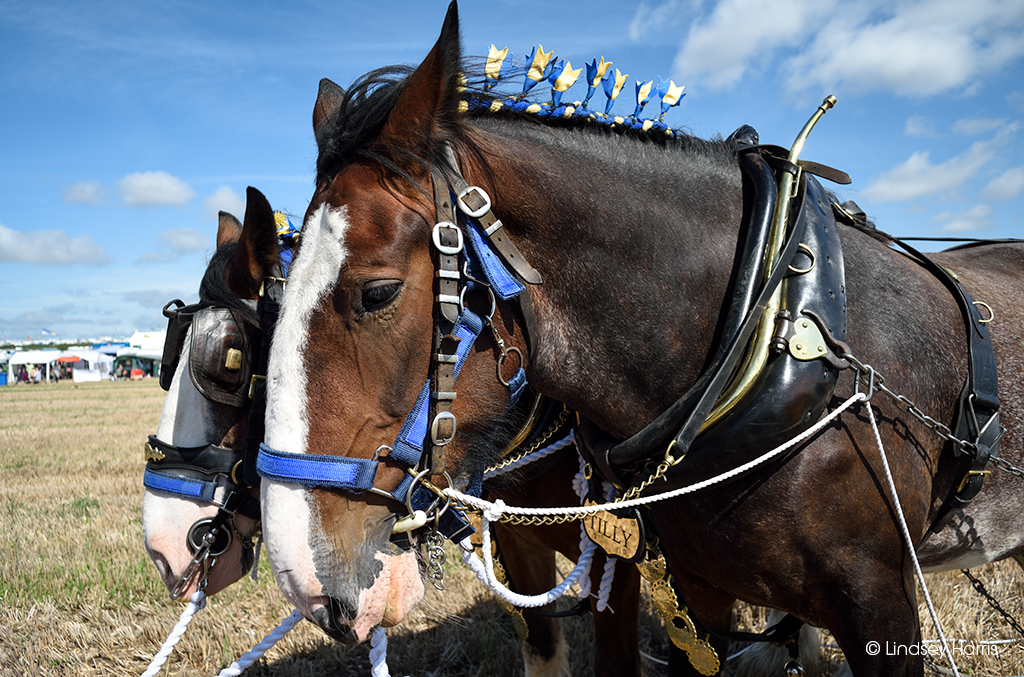 Tilly and friend. Heavy horses at the 2019 Great Dorset Steam Fair, at Thursday’s friendly ploughing match. More photos from the Steam Fair can be seen further down the page.

Thursday was the first day of the Great Dorset Steam Fair 2019. The weather was beautiful, the problems from the 50th Anniversary year appear to have been resolved, and there was (and is) plenty to see and do.

Due to public demand, the WW1 replica Western Front trench system is now a permanent fixture. The display also has three full-size replica WW1 MK IV tanks together in one place, which is something that hasn’t been seen for over 100 years.

Adjacent to the WW1 area is a new WW2 area. This is complete with WW2 vehicles and equipment, a new bar ‘Chez Violet’ and small stage. This is all set within a re-creation of a battle damaged French village square, with partially demolished houses, building frontages, rubble and timber etc.

Also on view is part of the actual Air Traffic Control Tower from RAF Tarrant Rushton Airfield, Dorset. This received the signal from the war office to start D Day operations. The old Control Tower was found recently in a local scrapyard, having survived nearly four decades since demolition.

Statue of angel on horseback

On the edge of the WW1 & WW2 area is a statue of an angel on horseback. ‘The Angels of Mons’ was created from scrap metal by Blacksmith and artist, Martin Galbavy, of Dorset Forge and Fabrication. The statue commemorates the Angels of Mons who, according to popular legend, were a group of angels who purportedly protected British soldiers at the Battle of Mons (beginning of the First World War).

‘Untitled’ is a sculpture of a haunted-looking soldier that overlooks the WW1 area. Made from beech, by Jamie Hart, it is in memory of all the men, women and children affected by the horror of wars-  past, present and future.

Fire breaks out at the Great Dorset Steam Fair 2019!

Today (Friday) a fire broke out at the Steam Fair in a hedge by Watford Gap in the Main Arena. The hedge was tinder dry and the fire started spreading pretty quickly. However, lots of firemen rushed to the scene and the panic was soon over.

Interestingly, despite the commotion, the Arena commentary didn’t refer to the fire at all, even though the two commentators must have seen it.

I would say that this year’s Great Dorset Steam Fair has been the best in the whole time I’ve been going there (eight years) – maybe rivalled by the 2013 Steam Fair. There seems to be more of every type of vehicle: vintage lorries, steam engines, traction engines, tractors etc. than ever before. In fact, more of most things. Also, there is greatly improved parking, plus more loos (and all immaculately clean – very important!).

If you’re reading this and are thinking of going to the Great Dorset Steam Fair in 2019 or next year, I can say that it’s definitely well worth a visit.