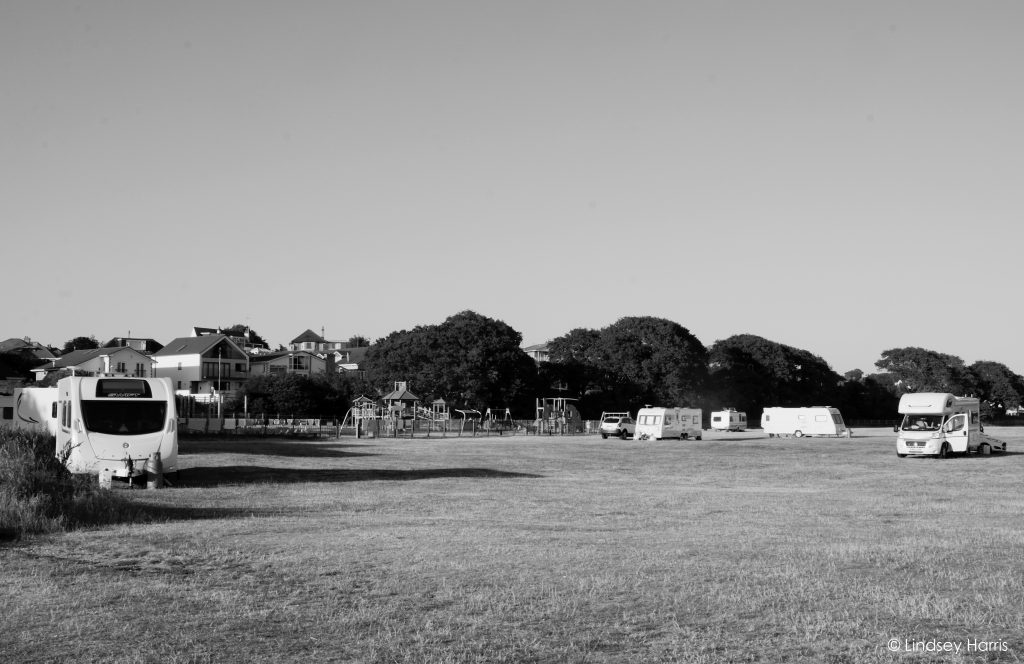 I was out early this morning taking photos and saw some travellers had parked their caravans and motorhomes at Whitecliff Recreation Ground. Whilst there, a well-spoken man with a couple of dogs came over to me and remarked that it was “disgusting” that the travellers were there and especially because they were by the children’s play area.

He then went on to say that there “might be paedophiles in the caravans, or anything.”  To say I was shocked at his attitude was an understatement; I thought it was very unfair and completely over-the-top to brand anyone as a child molester without reason or evidence. Although the group had obviously broken the law by being parked there, they were quiet and there was not a scrap of litter anywhere (surely one of the main complaints from most people?).

I felt almost ashamed to be there ‘gawping’, looking at the caravans alongside a man so prejudiced. Even though the travellers have broken the law, it’s no reason to talk about them almost as if they’re not even human.

The looks from the many other dog walkers said it all too. Some people were openly stopping and staring, unable to conceal their ‘horror’ (or that’s how it looked to me). Almost there and then I decided to see if I could offer the travellers some kind of reply.

Still mulling this over during a class at my local gym, I returned later to speak to them. There I met James and Tom, sitting by a caravan. I explained who I was and what I was wanting to do (take photos and ask them some questions) and almost immediately they ‘went for it’.

Whilst there, two men from Poole Council turned up to make contact with the travellers. They all knew each other from before, when the travellers had been parked up at Baiter, just a short distance away. Some friendly banter ensued, but the Council officials made it clear that they would be going to court and then the group would have to move on in a short time.

During this meeting, an elderly man wandered over and had a good look at one of the traveller’s cars: I noticed that he was closely inspecting the Road Tax. He commented that he wished he had their money and could afford a nice car and caravans like they have.

James told me that someone had also called the RSPCA to report the group’s little terrier, but I saw the dog (the only dog they have), which was playing around whilst tethered on a lead. It looked perfectly healthy and well cared for and this was clearly someone just trying to find a way to get the travellers into trouble. The RSPCA left – without the dog of course.

I returned later that day (when the sun was less harsh) and spent an interesting couple of hours talking to James and Tom, as we sat in the sun overlooking Poole Harbour. The women, children and other males were ‘invisible’ in their respective caravans, though the younger children were in the play area.

Many pedestrians, runners, dog walkers, and cyclists went past us. Most had a good look at the caravans and there was one very ‘near miss’ between me, a cyclist and a dog, as the cyclist looked over to the caravans and a small dog darted out from nowhere and nearly went under his wheels.

Most people stared us, including at me with with my camera and accessories, but only two passed the time of day. One was a man running and walking his dog at the same time, who commented that it was a “great spot to camp” and an elderly lady with a dog kindly asked if she could help me out by holding a piece of the photographic equipment I was using.

I asked James and Tom the questions that I feel me and many others want to know, and when I came away I felt quite an affinity for these particular travellers. Of course I realise that there are ‘good’ and ‘bad’ travellers, just as there are in the non-travelling community. James told me that wherever they go they get blamed if there is any trouble and, in fact, the men’s public lavatory at Whitecliff was vandalised the first night they were camped there, but of course they knew they would get the blame for it. It’s a fact that the arrival of travellers in an area means that local petty criminals and vandals see it as a convenient ‘free for all’, as people will automatically blame them for any theft, damage etc. Of course I can’t say for sure that this group of travellers isn’t responsible for any ‘bad things’ that happen in the area, but I like to hope not.

What I have learned from this is a bit about their way of life, why they want to travel and how hard it often is for them. Sometimes they might get moved on from where they have parked up two or three times a day, and sometimes they might get moved on on Christmas Eve or even Christmas Day. However, as they told me, it’s their choice to live like that.

I’ve asked Tom and James to give me a call if they ever come back to this area and I will catch up with them. 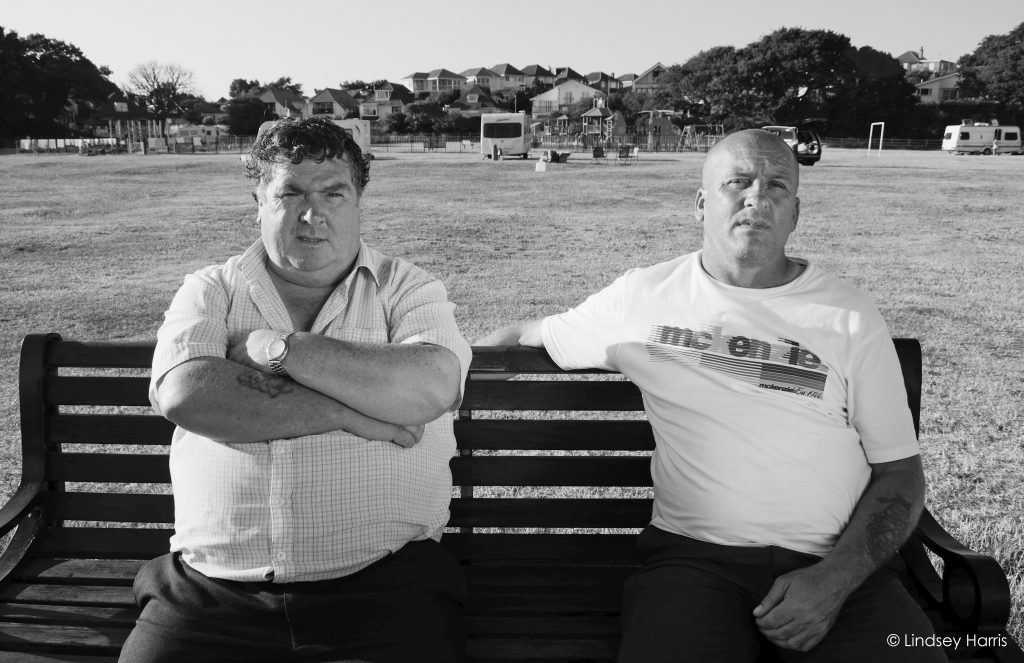 My Questions to James and Tom

Where were you before you were parked at Baiter (just along from Whitecliff)?

How many are there in your group?

Twenty adults and about twenty-five children, plus one terrier.

What sort of ages?

Are you all related to each other?

What nationalities are here?

We are all Irish.

Are you on the move year in, year out?

Where else have you been?

Ireland, all of England, France, Germany, Spain and Portugal.

Is there anywhere you keep going back to?

Is there anywhere you would like to go back to?

Ideally, are you looking to find somewhere permanent?

No. We’re always on the move.

Have you ever lived on a permanent site?

What happens about schooling?

We don’t go to school. That’s one of the things about true travellers, we never have done that.

Have you ever lived in a house?

What are the benefits of travelling do you think?

What are the downsides?

Being hounded from place to place.

Do you encounter anger from locals everywhere you go when travelling, or are some people friendly?

On the whole they’re mostly friendly.

Us non-travellers are told we mustn’t call you “gypsies”, we have to call you “travellers. How do you feel about that?

That’s nothing to do with us, we’re gypsies. It’s the f****** government that’s chosen to bring that in.

How do you feel towards non-travellers?

It’s their life, they can do what they want. We can’t change it.

Do you feel victimized and, if so, is that fair?

At certain times we do. It’s unfair.

How do you cope with victimization?

We’ve got used to it.

Do you understand why people are ‘anti-traveller’?

What do you think could be done about it?

People wonder how you make the money you appear to have (e.g. expensive cars and caravans)?

What would you do if you won the lottery?

Tom: Nothing, I’d stay travelling.
James: Well I might buy a house!

How do you feel about this photographic project?