This was an April Fool’s Day joke that took three weeks to plan, its inspiration based on a number of bike-obsessed customers getting told off by their other halves for spending so much time in the Ride shop! 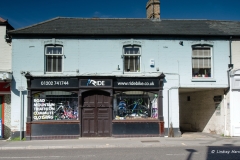